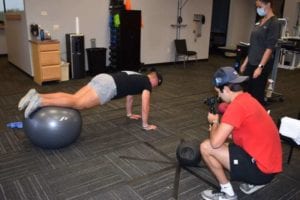 It’s hard to believe an athlete the caliber of Elliott Brown has never had surgery. After experiencing multiple shoulder dislocations, his surgery was to repair a torn labrum and biceps tendon; significant because the labrum provides shoulder stability in all directions, and the biceps tendon attaches to the top of the labrum which often gets damaged with certain labral tears.  Elliott’s surgery took place in early March 2020 right before elective surgeries were put on hold due to Coronavirus. Brown was a quarterback for Elkhorn South High School, and he is committed to the Husker football program as a preferred walk-on.  He will begin his Husker career as a wide (slot) receiver.

When we sat down to visit with Elliott about his journey, his genuine and authentic responses were refreshing! He shared his concerns and fears of surgery and therapy, and how he has benefitted from the process. He said he wasn’t familiar with physical therapy and thought it would be like massage and “mom” yoga workouts. What we watched on that May afternoon was anything but mom yoga! While starting off slowly and building up strength and range of motion after surgery, Brown said the process allowed him to safely get back to where he needs to be physically. He said he is “super grateful” for the safe workout, the supportive environment, and the focus on quality rehabilitation.

Elliott was being videoed by a friend during his recent workout, and we were able to observe the process. Clinic director Jordan Davis PT, DPT, OCS set up a circuit that included ball slams, walkouts, and push-ups with a ball, along with other exercises. Each circuit was timed, and there were between 12 and 30 seconds between each exercise. It was rigorous and challenging, but Elliott seemed to enjoy the challenge. As the sweat started to pour off his face, he removed his hat and replaced it with a towel. The intensity of his focus was apparent with each circuit, and while not easy, he completed each with a smile on his face.  Below you can scroll through five short videos of Elliott as he worked out.

It isn’t difficult to see how his hard work will translate to success as a Nebraska Cornhusker football player.  “It’s been my dream to play for my home state since I was a (little) kid. I now have the opportunity,” Brown wrote. The 6-foot-1, 175-pound Brown chose to walk on at Nebraska over Division II scholarship offers from Northwest Missouri State, Augustana and UNK. Brown threw for 1,322 and 13 touchdowns in 11 games this season. He also ran for 582 yards and five more scores. He helped Elkhorn South reach the Class A quarterfinals.

On Twitter, he said he was “born for this.” We have to agree!